The Samoans are back! A century after they were lucratively exhibited in German Zoos, three of them return to Germany in a folk-colonial spectacle by the Berlin choreographer Jochen Roller and the Samoan performance artist Yuki Kihara.

“Our new countrymen” was the motto under which the Samoans were presented to Germany at the time. The three invited dancers Malili, Lafaele and Paul take this motto literally – they study the culture and customs of their white brothers and sisters and alight on strange connections between the two cultures. The Bavarian people dance the Samoan Fa’ataupati in lederhosen, the painters of ‘die Brücke’ group use Samoan painting techniques and people in Berlin clubs wear Samoan chieftain’s tattoos on their shoulders.

Them and us is a mixture of hybrid choreography and film, in an extremely pleasurable way, the protagonists develop a re-writing of the German anthropological viewpoint of their former colony of German Samoa. 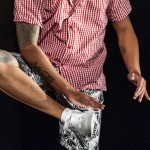 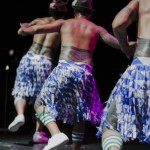 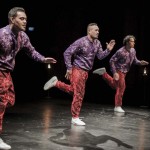 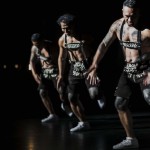 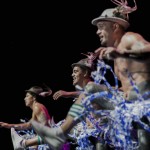