BASICALLY I DON’T BUT ACTUALLY I DO.
Jochen Roller/Saar Magal

In their new collaboration, German choreographer Jochen Roller and his Israeli colleague Saar Magal take a photo of an SS man shooting a Jewish woman as the starting point to compile a catalogue of images and situations that are stored in their heads and bodies as phantoms of the memory of the Holocaust. As children of the third generation, as the grandchildren of both perpetrators and victims, they examine via choreography how these phantoms of memory influence the perception of the other. What if the people in the photograph were originally Grandpa Roller and Grandma Magal? Without direct access to the historical information that disappeared with their grandparents, they use various experimental set-ups on stage to explore the ideas and realities that shape their German-Israeli relationship.

BASICALLY I DON’T BUT ACTUALLY I DO – Press 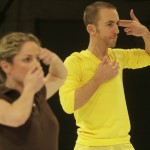 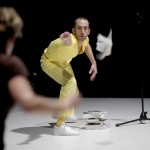 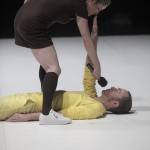 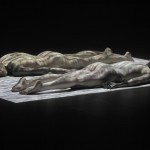